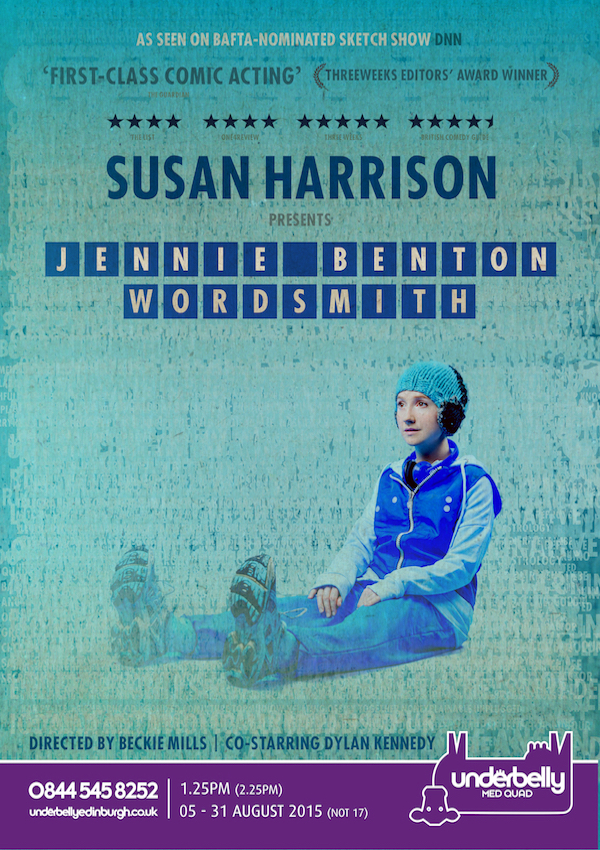 A coming of age comedy drama written & performed by Susan Harrison and featuring Dylan Kennedy. Directed by Beckie Mills. A funny and uplifting character-comedy show about love, youth and words. Jennie Benton Smith is a 15 year old rapper and spoken word artist from Tunbridge Wells who is on a quest to bring her show about love and words to anyone who will listen. With best friend the endearing Auburn Joe by her side she spits a whole heap of rhymes, and covers an eclectic mix of subjects, from her stick insect “Skrillex” to the nature of true love. But will she ever get to the end of her performance with a lost hype man, technical problems and a heartbreaking Facebook revelation to contend with? And will the seemingly shy Auburn Joe ever admit his true feelings for her?

“Superb timing and sharply intelligent social observation, this hour is a must view at this year’s festival…A delightful story of friendship and love” (EdfringeReview)

“Her creation, Jennie Benton Smith, is a 15-year-old – and Harrison is able to inhabit the body and mind of an adolescent so convincingly that it’s almost uncanny. The gawky physicality, the peculiar obsessions, the flitting between precociousness and nervousness: this is first-class comic acting. And the amount of thought that’s gone into this is evident from Harrison’s ability to improvise in character. It’s sometimes said by comics that there are no hackneyed subjects, only hackneyed approaches. Harrison certainly hasn’t come up with one of those” (The Guardian)

Next show: »
Susan Harrison is a Bit Weepy