Oh Yes We Did…finish the run 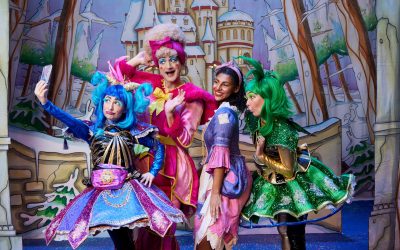 In November of 2021 I went to Newbury and began working at the Corn Exchange again, this time on their production of Cinderella. As with last year it was a fresh, funny take on a traditional Panto, written by Plested and Brown and Amanda Wilsher. However, unlike last year when we had to close halfway through (due to the C word) this time we competed the run! The cast and crew were a joy to work with, and it really was a great ensemble to be a part of. I played one of the Ugly Sisters, Hashtag, alongside the very, very funny Ali James. Last year I played a dog who improvised (basic) raps based on children’s birthday presents etc. This year we went all out and improvised two songs with fellow improvisers Ali James, Justin Brett and Jordan Clarke and also with (new-to-improv!) Alun McNeil-Watson, on percussion. 60 shows means we improvised 120 songs for audience members… and sometimes the audience even realised they were improvised! Lol.

Highlights of brilliant audience members include; the three cool young people, the woman who was part of a social group called The Red Hats who (in her words) “liked to have sex and socialise”, the little girl who listed nice things about her Dad corresponding with letters of the alphabet, the Oyster expert (!), the class who *only* listed nice things about their teacher, the yoga tree-loving lady, the prosecco drinking woman who wrote children’s books, the baby (didn’t say much but was very much there), the nerf gun fan, the teacher who taught emotional literacy, the electric cable woman who liked cross-stitch and Playstation, the child who said their school had a brilliant anti-bullying policy, the two joyful women who worked in communication, the Butcher, the Postman and of course Paolo. It was a challenge improvising songs in this way, in big costumes, in this context and often while being extremely exhausted. (Three show day on Xmas Eve anyone?!) But it was also an honour to work alongside this team, and an honour to talk to so many unsuspecting members of the audience.

About a week ago

Can’t stop thinking about Folk @Hamps_Theatre. It says so much about grief, cultural appropriation, exploitation of artists, music, the nature of creativity & why songs exist

We are performing in Bristol at @BITheatre on 28th Jan & frankly I can’t wait. But which vibe will we go for? pic.twitter.com/NhAFfkOQDb