These Folk: Finding the Mythic in the Mundane 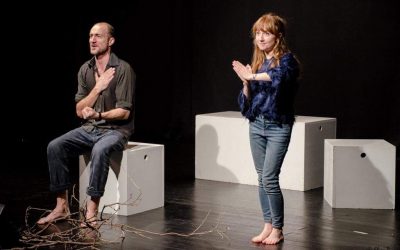 Lately I’ve been developing a new show with my pal (and fellow Showstopper) Justin Brett, which is an improvised folk music show. We have performed it once so far in Rome at the wonderful Welcome Improvisation Festival and are excited to be trying it out again this month, at Hoopla on June 6th, and next month at the Dogstar on July 18th. I come from a folky family so it’s been really nice rediscovering the music I grew up with and the amazing folk and country-influenced singers such as Iris Dement, Bob Dylan, Nanci Griffith and Joni Mitchell who left such an imprint on my soul.

My Dad has lent me an incredible book called “Folk, A Portrait of English Traditional Music, Musicians and Customs” which is a fascinating (and at times startlingly sweary) read. The best thing in it is a photo of Dick’s Rock Band which is quite literally a band made out of rocks. Dick (a music lover from Swaledale) collected the aforementioned rocks of varying sizes and would hit them with a mallet to achieve different “notes”. Amazing.

It was extremely fun stepping into the @Victoriocity universe. (And @mmaarrow and I got to play two unhinged old ladies, among other things) twitter.com/JenSugden/stat…